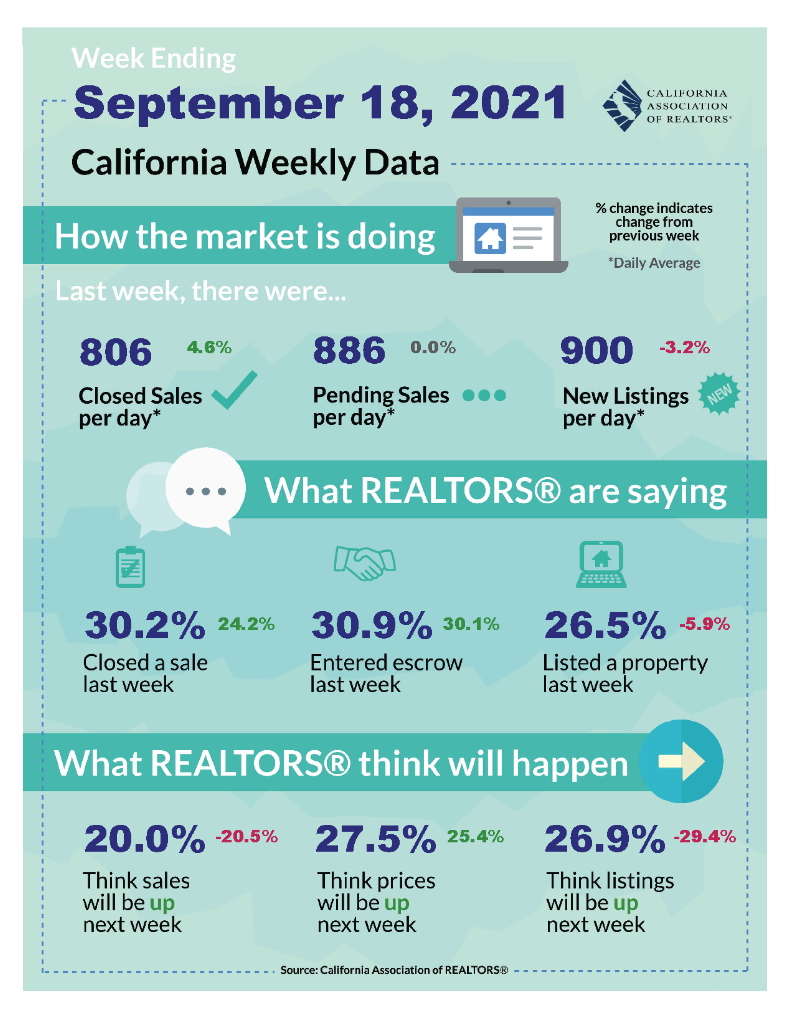 Most of the data that came in over the past week has been encouraging. The public health numbers continue to improve. Recent economic releases show that the macro environment continues to recover despite the uptick in COVID cases last month. And the housing market remains relatively stable with sales remaining well above pre-crisis levels and prices setting new all-time high levels. There are signs that the market has and will continue to moderate from 15-year highs reached earlier, but the data skewed more positive over the past week.

Strong Jobs Data Despite COVID Surge: Despite a surge in new COVID cases last month, which has typically correlated with a reduction in jobs in high-contact industries, the California labor market continued its recovery with a second straight month with more than 100,000 new jobs created. Government employers added back nearly 46,900 jobs as public schools reopened across the state. Leisure and Hospitality, which is home to California’s bars, restaurants, hotels, and entertainment venues, also battled back with over 33,000 new jobs. And, although the unemployment rate remained unchanged from July at 7.6%, it was because more workers re-entered the labor force, which prevented the headline rate from dropping despite nearly 60,000 workers moving from unemployed to employed status.

August Housing Data Shows New Record Prices: August’s sales pace was down 3.3% from July and down 10.9% from a year ago—to the lowest in 14 months. Despite the monthly and annual sales drop, California home sales remained strong by pre-pandemic standards, maintaining a solid year-to-date increase of 21.3 percent. California’s median home price set a new record in August at $827,940 — the fifth record set in six months. The August price was 2.1 percent higher than the $811,170 recorded in July and 17.1% higher than the $706,900 recorded last August.

Market Competition Ebbs Slightly, but not “Cool” Yet: Although sales continue to dip from 15-year highs, prices continue to set new records and the market remains incredibly competitive—just slightly less than it was a few months ago. In August, the percentage of homes sold above the asking price fell for the second time in a row to 67%. That’s still extremely elevated relative to historical norms, but it is an improvement from June when more than 71% of homes closed above list price.

Forbearance Exits Remain Encouraging: The Federal forbearance program is coming to an end in the next few weeks and the numbers remain encouraging that the market will avoid another major foreclosure crisis. The percentage of mortgages in forbearance continues to shrink—dipping to 3.08% from 3.23% the previous week. In addition, the exit data shows that banks have been much more amenable to working with homeowners facing challenges as more than 40% of borrowers getting out of forbearance have had their loan modified, had missed payments amortized into their loan over a period of time, or added onto the end of their loans. Another 42% of forbearances got off of the program because they never missed any payments, missed payments but already paid them back, or have since paid off their loans in full.

Interest Rates Down Slightly, but Stable in a Narrow Band: The typical rate for a 30-year fixed-rate mortgage dipped from 2.88% the previous week to 2.86% last week. Rates have been remarkably stable in recent weeks hovering just below 2.9% and the 10-year bond has also fallen, which suggests that the rebound in rates is likely to be sluggish over the near term. This perhaps explains the slight increase in homebuyer sentiment noted in August by CAR’s Housing Sentiment Survey of consumers as well as its weekly survey of REALTORS®. The mortgage applications also appear to be shrinking at a slower rate, as detailed below.

Light at the End of the Tunnel for Mortgage Apps?: Mortgage applications continued their streak of back-to-back declines with another double-digit year-to-year loss last week. This is the 17th consecutive week where there were fewer new purchase applications than there was during the same period last year. However, this is also when sales really began to take off last year so this partly explains the lackluster results. In addition, this was the smallest decline since early July, suggesting that the buyer fatigue may be losing momentum, if not plateauing fully yet.